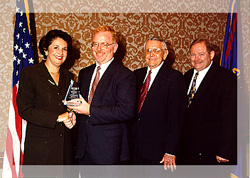 In 2002 & 1998, SPEC receives the Tibbett’s Award which is a national award given to small firms who exemplify the very best in Small Business Innovation Research achievement.

In 2004, SPEC received The Heavy Hitter Award. This award is a genuine St. Louis slugger bat with the inscribed words “Heavy Hitter.” SPEC was given this award for its outstanding accomplishments on the federal government’s SBIRs (Small Business Innovation Research) program for the last 18 years. Along with this token, Texas Governor, Rick Perry, and Austin Mayor, Will Wynn, signed a proclamation citing SPEC as an outstanding Texas business.

In 1999, SPEC was awarded the STRICOM “Star” Award from the United States Simulation,  Training & Instrumentation Command.